(**This post ought to come with a warning...it is quite long. I had initially thought this post would be in 2 parts, but couldn't decide how to carve it up. So here it is as one long post. **)

Now that we have been in Australia for a week, I finally have some time to post about our trip. It was a busy few days leading up to the BIG move. Here's a summary of how those days unfolded.

Thursday:
I left the boys with my parents and drove to the Twin Cities. This was a big day for two reasons. First, it was my sister's girls' night out before her wedding on Saturday. Second, Paul was flying in from Sydney later that night.

After checking into the hotel where we would be staying for the wedding and enlisting the help of an unsuspecting concierge to help me move my seven 50-lb suitcases and additional carry-ons (more on our luggage in a moment), I headed to downtown Minneapolis to meet up with the girls at the Brit's Pub. They had secured a couple of tables on the roof adjacent to the bowling greens. It was a lovely, warm and windy later Spring evening. And the bride-to-be, my sister Laura, looked fantastic. 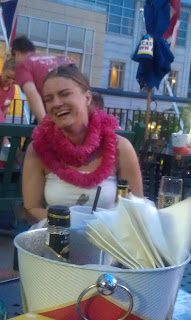 I left Laura's party and drove to the airport to get my darling husband. Paul flew in from Sydney (via Los Angeles and Chicago) and arrived at the Minneapolis-St. Paul Airport right on time. It was so great to see him - he had been in Sydney for 7 weeks!!

Friday
The best thing about Friday was reuniting Paul and the boys - well, Paul and Vincent (Desmond was just excited to have somebody around to smile at him and hold him!) Vincent was so pleased to see his daddy again - and I think that Paul was equally excited to see his boys.

The day was busy with last minute wedding stuff. Laura and her bridal party had a mani/pedi appointment and then lunch to follow. It was so much fun hanging out with the girls. Friday evening was the wedding rehearsal and groom's dinner. The groom's parents had reserved Victor's 1959 Cafe - the Cuban food and the conversation were both wonderful!


Saturday
Wedding day!! Laura and Nick's wedding was a beautiful celebration of their love for each other. The entire event was low stress. Laura was a stunning bride. And Nick ensured that the ceremony and reception had some great live jazz. The beautiful bouquets, corsages, and boutineers by The Monkey Flower Group featured locally-sourced plants and flowers. And I cannot wait to see the photos from Natalie Champa Jennings. Until then, here are two of my (very amateur) photographic highlights: 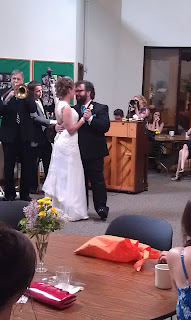 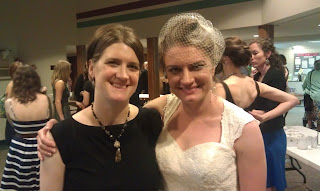 The evening concluded back at our hotel, where we had a mini-impromptu family reunion with my mom's cousins who were visiting from Wisconsin and Iowa. The conversation is always fantastic when this side of the family gets together!

Sunday/Tuesday
Today was the BIG moving day! Paul and I spent the morning packing the last suitcase and carry-ons. In the end, we had a few things that just wouldn't fit. But, all-in-all, we did quite well. After stopping by Laura and Nick's apartment for gift opening and wedding food leftovers, we headed to the airport. Mom and Dad met us there to help us unload all of our luggage. In the end, we checked eight 50-pound bags (all of them were 49, 49.5 or 50 pounds - the weight limit is 50 pounds), plus Vincent's car seat. We were then also able to gate check through to Sydney three of our carry-ons. We also had a diaper bag, 2 backpacks, Vincent's backpack, Desmond's car seat, and a food bag.
The good-bye at the airport was really tough. My parents had good-bye gifts for the boys - Vincent got Jeremy the Jet Plane from Thomas the Tank Engine and Desmond got a cute pink stuffed pig, which we affectionately call Cora (short for Decorah). Lots of tears were shed as we hugged our final good-byes.

We made it through security with little drama (although Vincent was not very keen to let the TSA people put his newly acquired Jeremy though the x-ray machine...) We found our gate and waited for our flight. While we were sitting there, Vincent turned to me and said, "Mama, why is it called an 'airport' if it's not in the air?" I told him that I did not know.

We flew with United Airlines from Minneapolis to San Francisco. I have very few good things to say about United. On this occasion, the airline managed to book seats for us that were not allowed for Desmond's car seat. The flight attendant was not helpful in assisting us in swapping seats with somebody. In fact, he told us that we would have to ask somebody, even though it was the airline's fault for not assigning us an appropriate seat. Luckily for us, there was a woman who was very willing to swap seats with us. Furthermore, as we were boarding the plan, hands full with a baby, a 3-year-old, a car seat, luggage, etc., I asked one of the flight attendants if she might hold the diaper bag for me or stow it in one of the overhead bins for me while I tried not to drop Desmond. She looked at me with disdain and told me, "No, I can't [help you]. I have to close the overhead bins. Besides, I have bad wrists." Luckily for me, another passenger heard this exchange, told me that he used to travel with his children all the time, and offered to put the diaper bag in a space in the overhead bin above his seat. I don't want to turn this blog post into a rant against United Airlines - so let me just say this: the people who work for United need to take a lesson from the guests who fly with them.

With the car seat in place in the seat next to the window and both boys buckled in, I made myself as comfortable as possible between them. (Paul was seated in the middle seat directly behind me). Before long, we were on the runway, picking up speed to take off. As the force of the plane's acceleration pushed us back in our seats, Vincent looked at me wide-eyed and said, "Wow! I like being on an airplane!"

The flight to San Francisco was fairly uneventful, except for one meltdown moment from Vincent, which I blame on the solar eclipse which was happening at the exact same moment. Although I did not see the eclipse, people in the seats around us did. We arrived in San Francisco on time and found our way to the Air New Zealand gate. I had called the airline several weeks before our departure and had booked seats in the bulkhead row so that we could get a bassinet for Desmond. We boarded the plane, made ourselves at home, and settled in for the 12.5-hour flight to Auckland. It was around 9pm local time - 11pm Minnesota time. Both boys were sound asleep before the massive, half-full 747 left the ground. 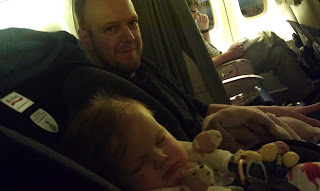 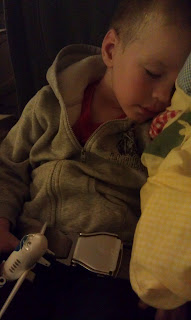 Fortunately for us, both boys slept most of the way to New Zealand. Vincent slept for at least 5 hours. He was up for about an hour to have something to eat and watch some of the kids' in-flight entertainment. I then gave him some benedryl and he fell asleep again. He woke with about 30 minutes left in the flight. Desmond slept in spurts and we alternated putting him in his car seat and the bassinet (which he only just fit in to!) The decision we made to buy him a seat for his car seat was one of the best things we did on this trip - he weights approximately 22lbs/10kg - much to heavy to hold for a long-haul flight across the Pacific Ocean.

Since both of the boys slept, Paul and I were able to get some sleep as well. Being at the bulkhead made it easy to stretch out a bit in an attempt to get comfortable. The Air New Zealand flight attendants were excellent - very courteous and accommodating. I look forward to flying with them again.

We landed in Auckland just before sunrise on Tuesday morning. Thanks to the International Dateline, we lost Monday. We had only a short layover in New Zealand before boarding our final Air NZ flight for the last 3-hour hop from Auckland to Sydney. Luckily for Vincent, he was able to get a window seat in the 2-3-2 configuration of the aircraft. 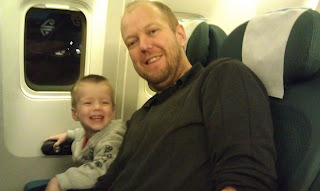 And Desmond got a middle seat between me and a very nice woman who had a few young children of her own. She enjoyed entertaining Desmond when he was awake (which wasn't very often...) 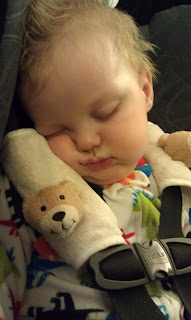 As the sun rose over the Pacific, the Australian coast materialized in the distance, just beyond the Air NZ wing tip: 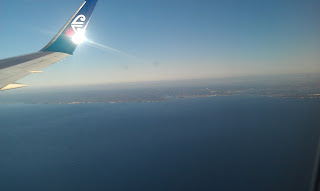 
We gathered our belongings, disembarked the plane, made our way through immigration in record time, and located the baggage carousel for our flight. Paul was in charge of getting all 11 suitcases + stroller + car seat, while I put Desmond in my Mobi wrap baby carrier (so as to have 2 free hands) and answered Vincent's unending stream of questions. Before long, Paul had precariously loaded all of our bags onto two carts. Fortunately, while I was waiting for Paul's return from the over-size baggage area (where he went to collect Vincent's car seat and our stroller), one of the customs agents came over and cleared us through customs. 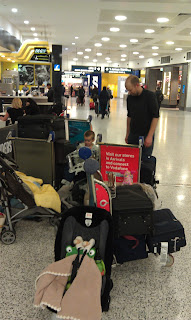 And so, with Desmond strapped to the front of me and Vincent dancing around next to me, I followed Paul out the of the customs and immigration area, through the automatic double doors and into the arrivals hall at Sydney International Airport.

We had finally arrived!

Paul's parents, sister and brother-in-law met us at the airport, and, after loading up our luggage into a trailer behind one of the cars, they drove us to our new home in Asquith, one of Sydney's northern suburbs. 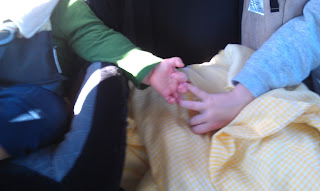