As I posted on my blog several weeks ago, Paul was successful in finding us a house to rent. The house has some positive features, but our overall assessment of it is that it is quirky. Let me explain.

First, it is important to understand that Paul was responsible for finding us a place to live and a car to drive (he found us a great little 2007 Toyota Corolla). He spent a couple of Saturdays going to open houses and meeting up with real estate agents. He put an application in for one house, but we didn't get it. There was another house that he really liked, but it was just out of our price range. Then on one Saturday, he looked at 8 different places - both apartments and houses. Sure, the 2-bedroom apartments in our price range were newer and the rent was a bit less, but we really wanted 3-bedrooms and room to spread out. We've done the apartment thing and we are over it. Especially with two (very) vocal (and not always happy) boys. The he came across this 3-bedroom house in the North Shore suburb of Asquith. The rent was in our range. Great. He put in an application, and we were notified a few days later that it was ours. 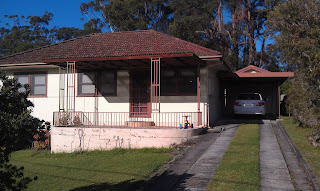 The only catch was that it was not available until May 20th. Paul was flying to Minnesota for Laura's wedding - he was leaving Sydney on May 17th and we were all flying back into Sydney on May 22nd. The last thing we wanted was to have to move into an empty house the moment we arrived in Sydney. Luckily for us, Paul's parents, sister, brother-in-law, and our friends quickly came to our assistance. They picked up the keys, cleaned the house, and all donated/loaned furniture and housewares. When we walked through the door on the morning of May 22nd, our house looked like - and felt like - a home. We had a sofa, TV, dining table and chairs, beds, a crib, a chest of drawers, a wardrobe, bookshelves, dishes, glasses, pots, linens, a desk, space heaters and a high chair. And lots of "new" toys. Both Paul and I were overwhelmed with the generosity of everybody. Vincent was thrilled with the toys :)

But then we started to notice the quirky characteristics of the house. First, it is an older house - probably built in the early 1950s. As such, it has high ceilings and original windows and doors. So, it is drafty - quite drafty. And houses in Sydney tend to not be insulated. And most houses do not have any sort of centralized heating - usually it doesn't get cold enough to need it on a regular basis. So this house is cool and drafty in the winter (now) - but will be cool in the summer.

Second, there is one bathroom, but three toilets. It is not unusual for houses in Australia to have a toilet separate from the bathroom - usually in a smaller room right next to the bathroom. In my opinion, this is quite a nice feature. When Paul looked at the house (on that day when he looked at 8 different places), he didn't notice the toilet situtation. He just assumed that there was one in the bathroom along with the sink, tub, and shower (which is separate from the tub). When we arrived and noticed that the toilet was not in the bathroom, we weren't all that surprised. But there was not little "toilet room" next to the bath room. So where was the toilet??

As I mentioned above, it turns out that the house has three toilets. Two are outside the house. I believe the home's original toilet is in an "outhouse" style room with a flush toilet outside the house near the back of the garage. To be honest, I haven't actually been in there yet. Then, it looks like at some point after the house was built, they added on an enclosed breeze way and put in two toilets - one "inside" the house (accessible via this enclosed breeze way - it is truly breezy with just a screen door linking the breeze way to the patio) and the other outside the house (the idea being that if you were entertaining and having a party outside and didn't want your guests tramping through your house to use the loo, they could use this outside toilet). Suffice it to say - it is quite cool going to the loo during the night and/or first thing in the morning. And almost without fail Vincent will comment that the potty is cold in the mornings.

The rest of the house is pretty much what you would expect from an older, rented house. The carpet is so-so. The closets smell musty. Fortunately, we have only seen one cockroach - and it was already dead.

But there are lots of good things about the house. The location is fantastic - we are a 10 minute-walk to the local train station and less than a 10-minute drive to where the express trains stop. The local elementary school (for when the boys start kindergarten) is a block away. Paul's sister and her family live 5 minutes away  by car. The shops and mall are nearby. It is a sleepy street close to parks.

And the yard is great - there is a large front yard and a large back yard. There is a huge clothes line in a very sunny spot (it is worth mentioning that most homes don't have a clothes dryer and those that do don't use them as their primary source of drying clothes. We don't have a dryer - yet.) There is room for a veggie garden. There is also a great covered front porch and a large covered patio.


The rooms are pretty decent as well. The bedrooms are fine and the kitchen is pretty good - lots of cupboard space. There is a combined living and dining area. It works - but the eating area is carpeted. Not really the best option with two kids who seem to spill half of their food on the floor. 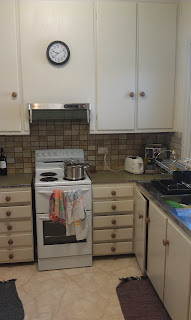 So although it is not our ideal home, it will work for now. We just keep repeating the mantra - our house is quirky and this isn't forever.

In the meanwhile, our Nisse is keeping a watchful eye on our new home. 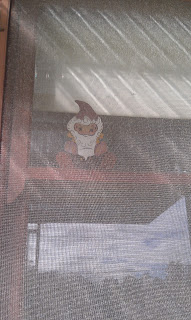