Today is Father's Day in Australia.

Before you ask, Mother's Day in Australia is on the same day as Mother's Day in the United States. And, no, my Australian-American husband does not get two Father's Days - just one. We celebrate the holiday in whichever country we are presently living.

My husband is a pretty laid back and humble guy. And, to be honest, he's probably going to be a bit embarrassed when he finds out that I am about to dedicate an entire blog post to him and the fact that he is a wonderful dad to our two boys.

Paul has told me that when he was a teenager and an young man in his early 20s, he never really saw himself becoming a husband - much less a father. But then he met me, we got married, and things changed (thank goodness!!) 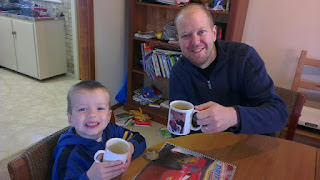 Paul was present at the birth of both boys - Vincent in April 2009 and Desmond in September 2011. But it was with Desmond's birth that he went above and beyond the "normal" father duties when he helped me deliver our baby at home (it was a planned home birth) before the midwife arrived (Desmond was in quite a hurry!) 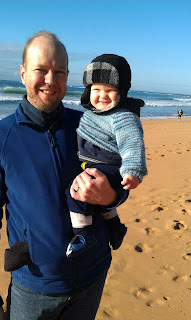 If you know Paul at all, you know that he is a thoughtful, gentle, and kind man. As a father, Paul is patient and practical and consistent. He plays golf and trains with Vincent, stacks up blocks for Desmond, and enjoys reading to both boys (when Desmond isn't grabbing at the pages). He has amazing and unique bonds with both boys.

This year, we are spending Father's Day at home - Paul went to the Father's Day breakfast at the boys' daycare on Friday and both boys made him cute Father's Day gifts. But we are home today, just hanging out. Things have been a bit stressful of late, and it is nice to have the day at home with just us. 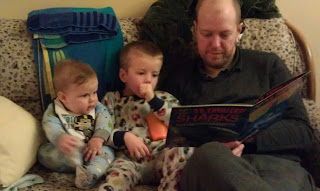 Happy Father's Day, Paul. The boys are lucky to have you as their dad and their role model. We love you!